The former member of Congress from Buffalo, who had simply expressed support for the investigation launched by State Attorney General Letitia James, went about her largely powerless job, attending ceremonies and making it a point of pride to visit all of New York’s 62 counties at least once annually.

Have spent my career encouraging young women to run for office – wonderful to see many future leaders here tonight.

Bronx Dems are in great hands under leadership of new chair @jamaaltbailey. Onward to victory in Nov! pic.twitter.com/9QyPikZUOC

Now the 62-year-old Democrat, elected in 2014, is about to make her presence known in a far bigger fashion when she replaces Cuomo as governor beginning Aug. 24.

With Cuomo’s announcement Tuesday that he’s stepping down in two weeks, Hochul is poised to make history as New York’s first female governor — and the first to come to Albany from north of Peekskill since Gov. Nathan Miller took office a century ago.

“As someone who has served at all levels of government and is next in the line of succession, I am prepared to lead as New York State’s 57th Governor,” Hochul declared Tuesday.

Hochul would come into the top office after over five years of tirelessly zig zagging across a state of nearly 20 million people on Cuomo’s behalf, attending ribbon-cuttings and touting the executive office’s achievements. She also helmed the governor’s “Enough is Enough” campaign against sexual violence on college campuses.

Now, as New York’s incoming next leader, Hochul’s getting ready to endure scrutiny of a relatively modest public service record that might suggest political pragmatism to some or a penchant for chameleonism to others. Her fans say she’s up to the job.

“She’s a tough chick from Buffalo and I think she’ll be prepared,” said State Sen. Diane Savino (D-Staten Island/Brooklyn). “She certainly knows the issue that affects the state from the North Country to the South Bronx.”

Before Hochul became the second lieutenant governor of Cuomo’s three terms, she amassed a history as a center-right Democrat.

In 1994, she was elected to her first political office –– joining the Hamburg Town Board –– after running on both the Democratic and Conservative ballot lines. She became Erie County clerk in 2007. And when she sought re-election three years later, she ran on four party lines: Democratic, Independence, Conservative and the Working Families Party.

Her Democratic bona fides have been hip-checked several times since then.

In 2018, as actress and activist Cynthia Nixon ran for governor and Public Advocate Jumaane Williams sought the lieutenant governor slot, they pushed for driver’s licenses for undocumented New Yorkers. Hochul, in a turnaround, tacitly gave her approval.

“I think she probably reflects the politics of western New York, which tend to be similar to Staten Island: moderate in many respects,” said Savino.

In 2011, Hochul ran her first congressional race and beat a Republican in a conservative district that had been held by the GOP since the 1960s. She won the congressional special election race by five percentage points — likely helped by a Tea Party candidate who siphoned off Republican votes. 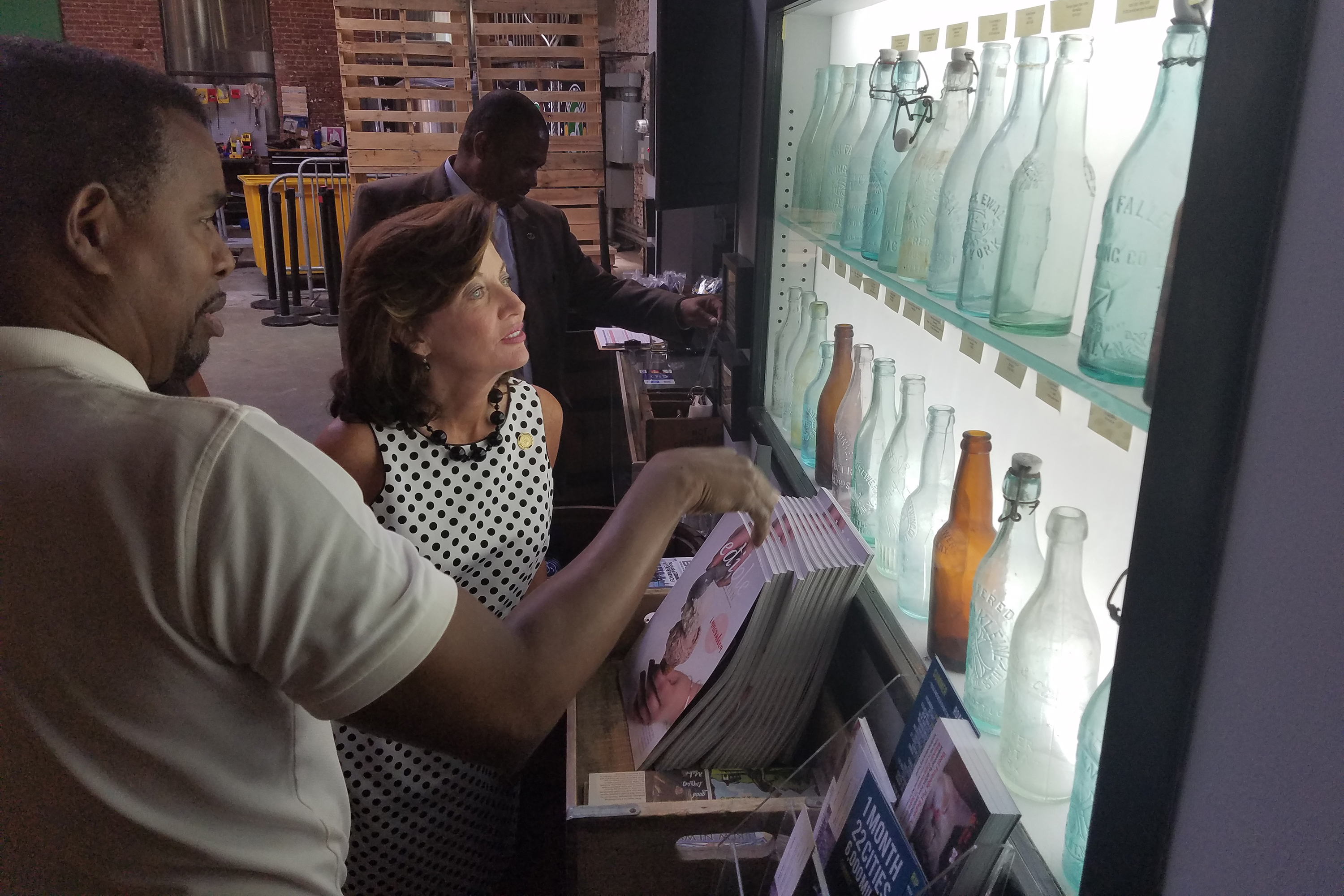 Office of the Lt. Governor Lt. Gov. Kathy Hochul gets a tour of the Brooklyn Brewery in the Brooklyn Navy Yard in 2016.

During her brief stint in the House of Representatives, Hochul campaigned heavily against a Republican plan to convert Medicare into a voucher program that could also be used in the private market.

In 2012, Republican Chris Collins, a former Erie County executive, challenged her re-election bid. The lines of her congressional district had been changed by a federal magistrate. She lost her seat to Collins by 5,000 votes or a margin of 1.6 percentage points.

There was no such problem with Hochul: After her election, Cuomo began sending her across the state to highlight his pet projects and serve as his administration’s main surrogate, bringing her to all corners of New York. 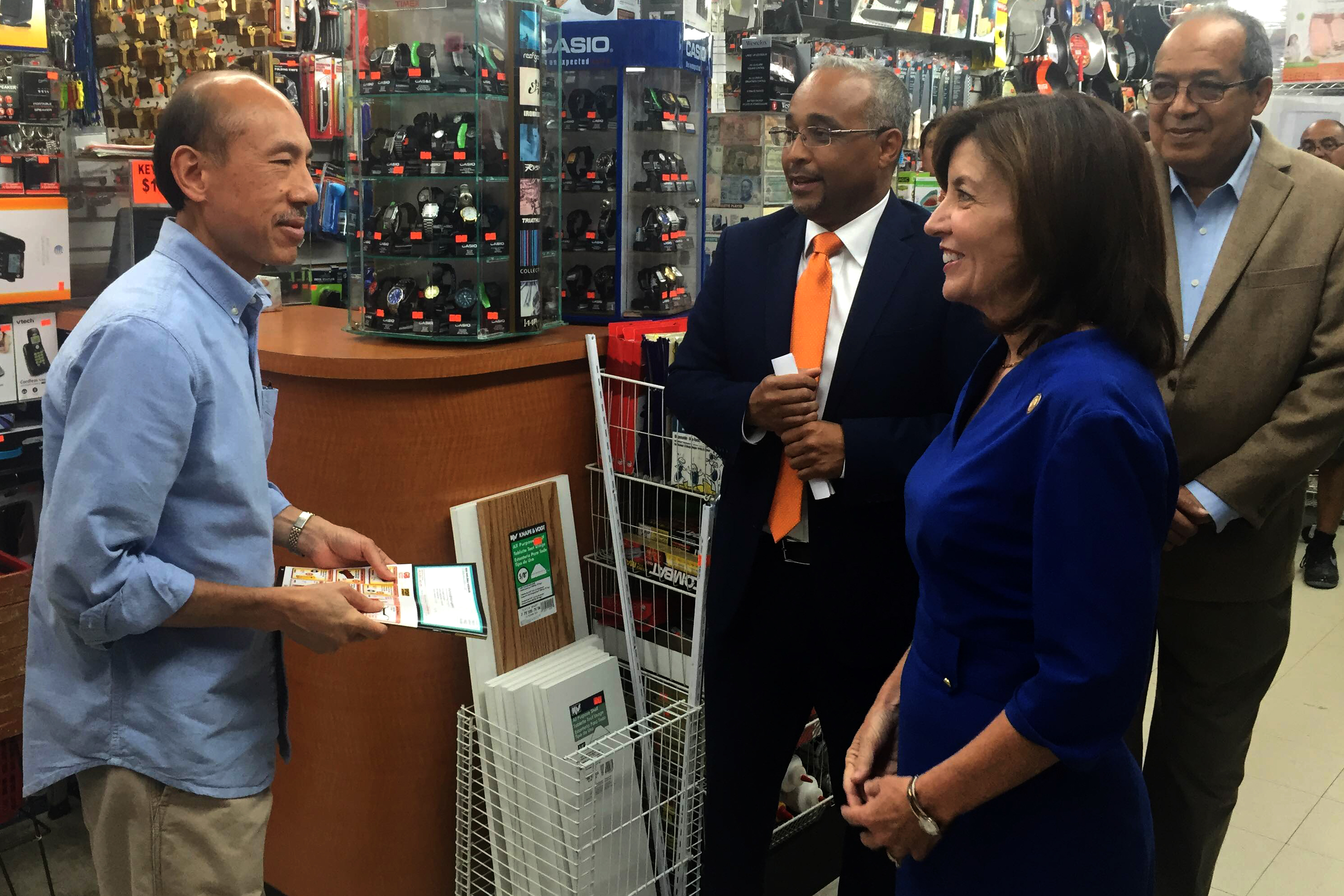 Visits to New York City may not be enough for Hochul to prove to downstate Democrats that she’s the right candidate to potentially succeed Cuomo in a 2022 election, especially with local officials like Williams said to be considering a run.

Still, she has shown an ability to fundraise when needed, collecting and spending nearly $4.8 million in her two congressional runs. So far, her campaign has raised $1.9 million this cycle and has $1.7 million on hand.

From Upstate to D.C. and Back

Hochul was born the second of six children to Jack and Pat Courtney, who started their marriage living in a small trailer in Buffalo. Her father was a clerical worker at Bethlehem Steel, where he also was an union organizer. He eventually became president of an information technology company.

Hochul attended Syracuse University, where she boycotted a campus bookstore for high prices and tried to get the school to name their famous stadium, the Carrier Dome, after alumnus and NFL player Ernie Davis. She also rallied to get the university to divest from South Africa to help end aparthied.

After graduating from Catholic University with a law degree, Hochul worked at a Washington law firm. She later toiled on Capitol Hill as an attorney and legislative aide for then-Rep. John J. LaFalce and U.S. Sen. Daniel Patrick Moynihan, both New York Democrats.

Hochul lives in Buffalo with her husband, William Hochul, a former U.S. Attorney for Western New York who now works as general counsel for Delaware North, a hospitality company. They have two adult children, William and Katie.