A sedan tries to drive through rising flood water down Leonard St in Brooklyn. | Hiram Alejandro Durán/ THE CITY

This article was originally published
by The CITY on Sept. 16, 2021, 8:50 PM EDT
BY CHRISTINE CHUNG, JOSEFA VELASQUEZ AND ALLISON DIKANOVIC

Two weeks after the remnants of Hurricane Ida tore through the city, killing 13 people, basements across the city are still drying out as many New Yorkers struggle to recover from the punishing storm.

With millions of dollars in federal assistance now unlocked for the city, some households that saw rivers of rain and sewage pour in will have a lifeline to begin repairing and rebuilding.

But that help isn’t for everyone.

Left out of Federal Emergency Management Agency aid are undocumented immigrants — many of whom live in the Queens neighborhoods that were pummeled hardest.

“I’ve lived in this country for four years and this is the first time I’ve lived in a basement. I was looking for affordable housing,” Marlén Romero, a 32-year-old Corona resident, told THE CITY in Spanish. 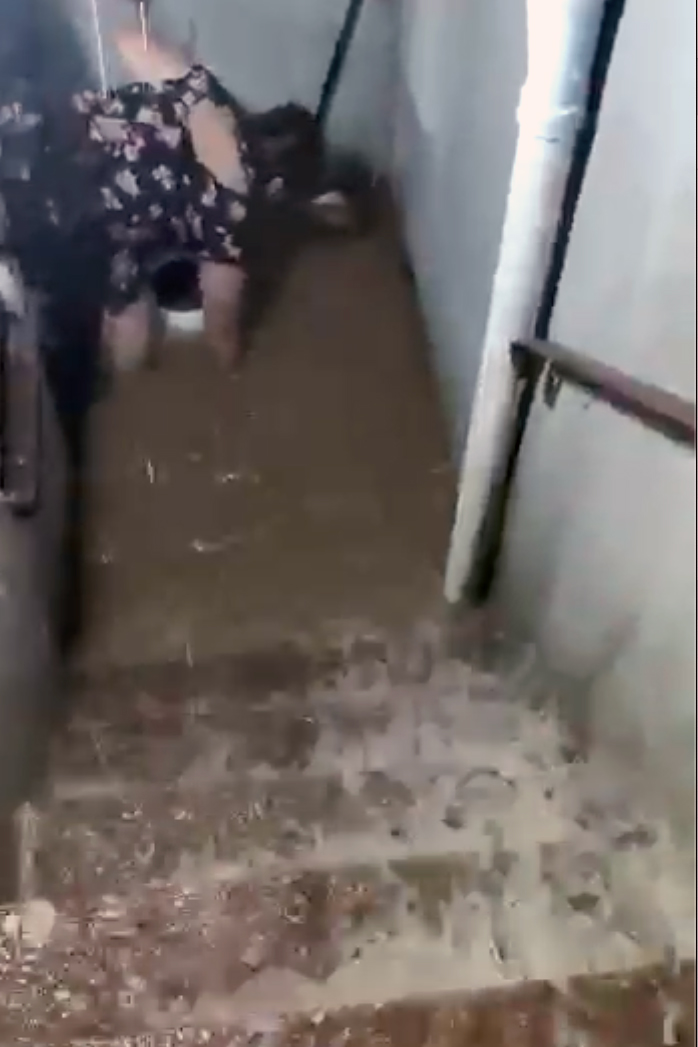 Her home and belongings were drenched as Ida dumped more than seven inches of rain in an hour on parts of the city, flooding her apartment with about two feet of water.

“I had no idea that living in a basement would be so dangerous,” she said.

A native of Mexico, Romero and her husband are both undocumented, which would shut them out of federal disaster assistance. But her family may still qualify for assistance because the couple’s 4-year-old daughter is a U.S. citizen.

“It’s not fair for all of us who are undocumented who don’t have someone ‘legal’ in their households. We live in basements so we can save some money because rent in this city is so expensive. Our income doesn’t stretch that far to get a better home,” she said.

She only learned that there was financial aid available for flooding victims through a local community group, Familias Unidas, when a school social worker mentioned it as her daughter began preschool earlier this week.

Assemblymember Catalina Cruz, who represents Corona, told THE CITY her office has fielded calls from some 20 families ineligible for FEMA assistance because of their immigration status, and there are likely dozens more in similar situations.

“Our country’s history of exploiting undocumented labor, then immediately turning its back on these same people during times of need, is both disheartening and not new,” said Cruz, a Democrat.

“Many in our community lost everything after the devastating floods caused by Ida,” she added. “They turned to our federal government for help, because it is our job and responsibility as elected officials to help. Instead, some of our constituents were met with the inhumane reality that they were excluded from FEMA support because they lacked a Social Security number.”

There are few official places undocumented storm victims can turn to for help: They can file water damage claims with the city Comptroller’s Office. Josiel Estrella, a spokesperson for Comptroller Scott Stringer, said that 404 claims had been filed as of Thursday, noting there is no set maximum for the amount applicants can receive. 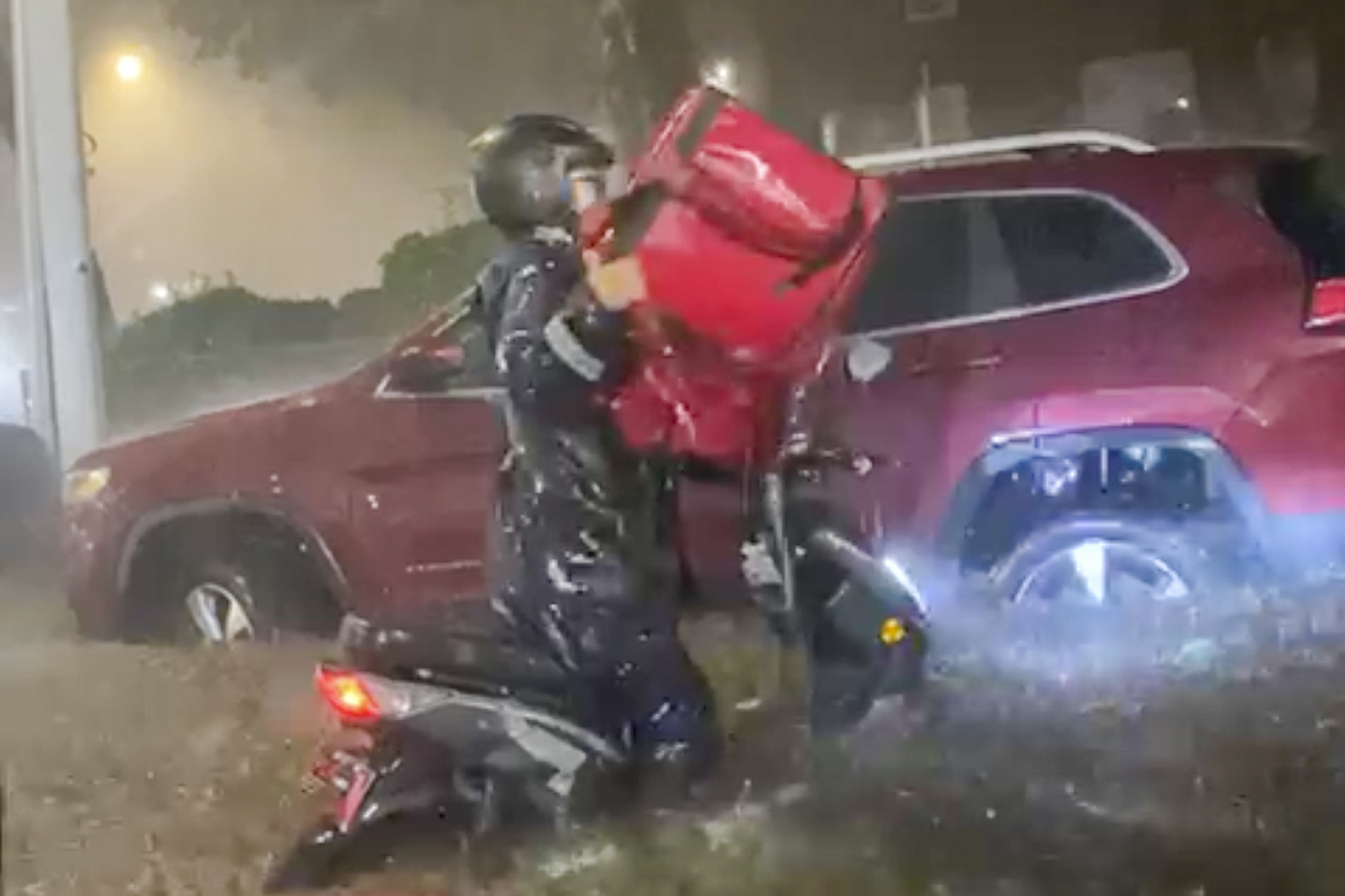 Delivery workers in Astoria toiled in waist-deep water for less than minimum wage as the remnants of Hurricane Ida poured over the region on Sept. 1, 2021. Obtained by THE CITY 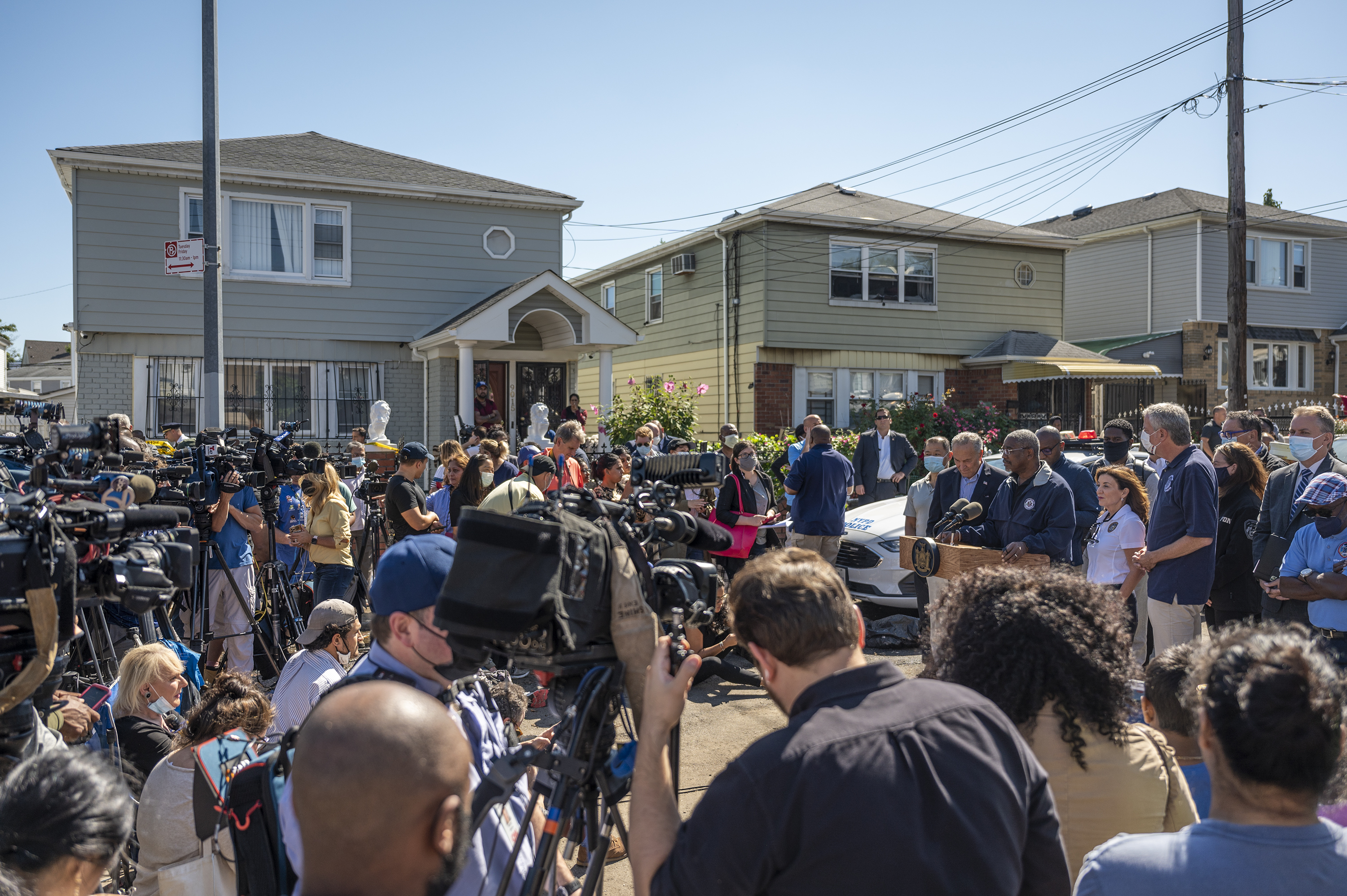 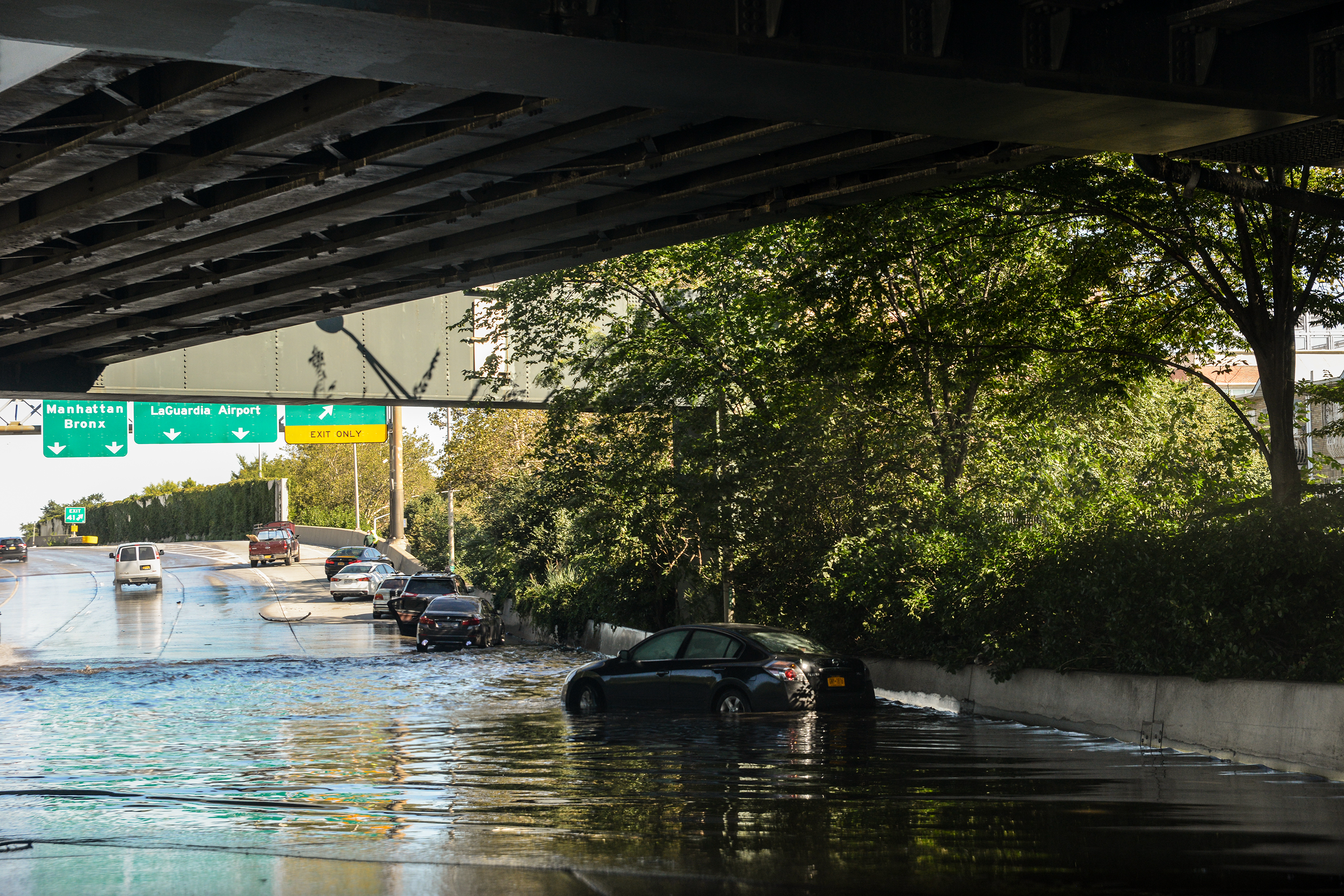 Meanwhile, the Red Cross and the city Department of Housing Preservation and Development have been footing the bill for hotels for more than 200 displaced households, which may include undocumented New Yorkers.

The Red Cross will also soon roll out a program to offer up to $515 in a financial subsidy per household, regardless of immigration status, said spokesman Michael de Vulpillieres.

But all of that is nowhere near the roughly $34,000 available to households through FEMA, which made a “big difference” to the area when help arrived in the days following the storm, said Queens Borough President Donovan Richards.

As of Thursday, the agency had approved just over $10 million for residents of New York State.

“A lot of homeowners can’t even do that,” said Ramos. “My biggest fear is that this results in a foreclosure crisis in many areas of our city.”

She added, “We have never really recognized the contributions of immigrants and the humanity of immigrants, which I think is the case here.”

‘Exploring All Possible Ways’ to Help

Lawmakers are looking for Washington, Albany or City Hall to step in and provide some financial assistance for the immigrant New Yorkers shut out of help.

Cruz, who was previously undocumented, told THE CITY that she’s flagged the issue with members of Congress, FEMA and new Gov. Kathy Hochul, who spent her second week on the job touring flooded areas.

A spokesperson for Hochul said the administration is “exploring all possible ways to provide assistance to undocumented New Yorkers.”

“The governor is committed to ensuring all New Yorkers get the help they need in the recovery from Ida,” said Hazel Crampton-Hays, a spokesperson for Hochul.

Creating a pool of money specifically aimed at undocumented New Yorkers isn’t without precedent. Earlier this month, the state began distributing aid it had approved in the spring for the Excluded Workers Fund, a $2.1 billion program for New Yorkers who weren’t eligible for unemployment benefits or pandemic relief funds.

The fund, the first of its kind in the nation, is geared toward undocumented workers and those who work in a largely cash economy, many of whom continued to work through the peak of the pandemic in the spring of 2020. 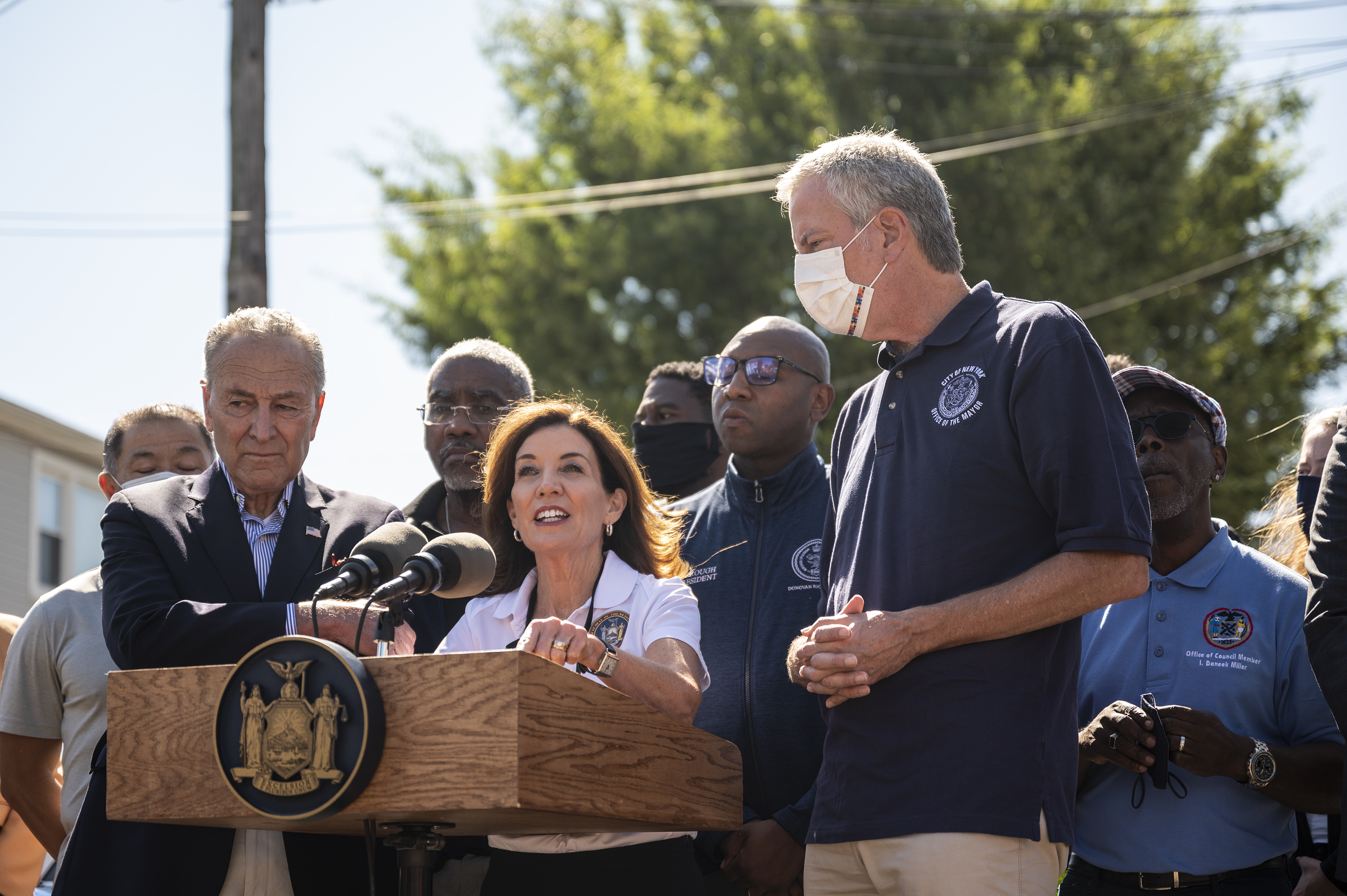 Meanwhile, Assemblymember Jessica Gonzales-Rojas (D-Queens) told THE CITY last week said she was reaching out to the de Blasio administration to develop some sort of funding pool to help undocumented New Yorkers.

There are nascent discussions about creating a city Hurricane Ida relief fund for undocumented New Yorkers, according to Annetta Seecharran, executive director of Chhaya, a nonprofit group focused on the South Asian and Indo-Caribbean communities in Queens.

The Mayor’s Office of Immigrant Affairs (MOIA) recently contacted the group to discuss the possibility of a fund for undocumented immigrants, Seecharran said.

A MOIA spokesperson declined to say whether the agency is considering such a fund, instead stating that it “continues to monitor the impacts of Hurricane Ida on our immigrant neighbors to identify specific needs and determine culturally competent solutions.”

Richards, meanwhile, said he is calling private foundations to seek aid for those left out of the federal help.

“There are going to be families here that don’t qualify [for government help],” Richards said. “How do we make sure they’re whole?”

Advocates told THE CITY they’re hearing mixed responses from tenants and homeowners about navigating various aid applications — even when they are documented.

Rupy Begum, a homeowner in Jamaica, Queens, applied for FEMA assistance on Sep. 7, just days after the hurricane hit, hoping to remedy damage including mold in the walls from flood water and lingering plumbing issues.

“I have a mold issue down there,” she said. “I can’t even go into the basement without coughing. And no one lives down there, but a lot of people are still living in these basements and they need help.”

Begum, who is originally from Bangladesh, said she never heard back from FEMA. But about a week and a half after applying for aid, she got an email from the U.S. Small Business Administration notifying her she could put in for a federal disaster loan.

“I don’t know why they sent that,” Begum said. “We don’t need a loan. We need help from them, and we’re not hearing from them. They’re not calling us, no email, nothing in the mail.”

As for Romero and her family, she applied for FEMA assistance earlier this week and hasn’t heard back yet.

And now they wait, staying in their basement home that grows more humid and musty from the accumulating mildew.

“It’s a situation that breaks my heart,” Romero said, crying, recalling her daughter making herself a bed on the floor of their living room.

“It’s enough to throw you into a depression,” she added. “So many people have been affected and are scared and don’t know what to do. At least I have my daughter to keep me going. I know something good is on the way.”