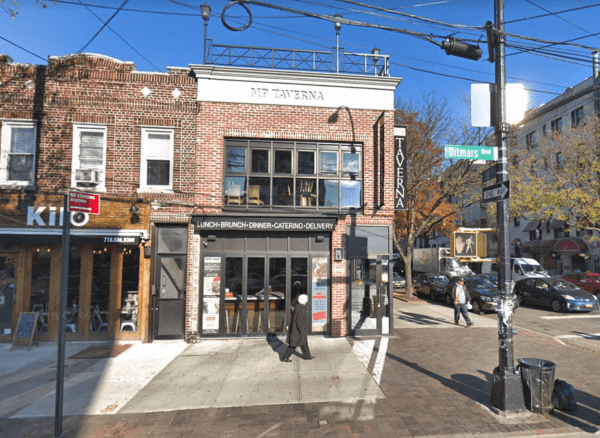 A small restaurant chain known for offering extravagant burgers, milkshakes and sandwiches plans to open an Astoria location in August.

Burgerology, which is known for serving burgers loaded with creative toppings and frosting-coated milkshakes, will open at 31-29 Ditmars Blvd, the former location of MP Taverna. The restaurant has built a “cult following,” according to John Falcicchio, the general manager of the restaurants. He said restaurant goers enjoy the wide and wacky range of burgers,  cocktails, fries and shake toppings that are offered.

These include the “mac attack” burger— a burger topped with mac and cheese, cheese sauce and served on a pretzel bun.

The source of the restaurant’s success, Falcicchio says, is that the food looks as good on social media as it tastes.

The creation of the restaurant’s shakes— crafted by coating a glass in vanilla frosting and rolling it with cereal and candy toppings— was featured in a video by online lifestyle magazine Insider. The video was viewed nearly 100,000 times.

The restaurant also boasts a full bar with similarly innovative cocktail options, including a cocktail that lets off smoke.

“These days everybody has some form of social media, and people forever have been eating with their eyes,” Falcicchio said. The menu items, he said, are “all geared and built towards making amazing pictures.” However, customers drawn to the restaurant by photos and videos come back, he said, because of the taste.

All of the burgers are served with USDA prime beef; the food is served with house made dressings and sauces; and the fries are cut by hand, Falcicchio said.

Burgerology has been around for less than two years, but its owners have a burger joint legacy.

The company is run by husband and wife team, Eddie and Georgia Gatoulas. Georgia also co-owns New York Burger Bar in Massapequa, Long Island. Their children, John and Maria Gatoulas, will be co-managers at the Ditmars location.

The Ditmars location will be Burgerology’s largest, and is planned to feature 100 indoor and 80 outdoors seats, as well as an upstairs event space. Upon opening, Burgerology will also deliver to the surrounding area.

This is FANTASTIC, enough with the Eurotrash corner restaurants on Ditmars and 30th and bring on the upscale chains! Smell you later!

NO MORE BURGER JOINTS! Flattops is already for sale, and what a trendy shithole that place is.
No one needs $10 milkshakes in Astoria or giant burgers.

I left, Astoria no long belongs to the real astorians, so you can keep your junk food and enjoy

I love how many people “left” but still are the same trolls as when they lived here. Please, leave again!

Hey Frank, I’m far from a troll, i left Astoria with a broken heart, nonetheless, you can’t deny it’s not the same, i will always love Astoria, take good care of it.

MP Taverna was horrible. I gave it three chances and it failed all three. I’m surprised it lasted this long. MP Taverna you are the WEAKEST LINK! Good by!

No more burgers! No more heart clogging foods! Can we get some more vegetarian or even some good Indian food?

We need Arab cuisine on Ditmars.

Sorry to break to you but vegetarian and Indian restaurants don’t really sell well these days. When people go out they want to splurge. Unfortunately Indian is not bad cuisine, however every Indian restaurant I come across is ways empty. It’s sad but true…

Is there not an Indian restaurant under the Ditmars stop? Always looked tasty, I have not myself tried it.

Grow your own fruits and vegetables and buy organic produce from the supermarket. Prepare meals at home if you want to truly eat healthy.

Most burgers have vegetables on them though. Pickles, tomatoes, lettuce. All these help counter the negative effects of the bad parts of the burger which isn’t alot. I know when i tell my young kids to splurge on food to make sure they eat the included fruit and veggies or bring them home so we can plant in our fruit and veggie garden.

Good riddance, MP. What an overpriced joke that was. Decor that was out of style before it opened, ZERO plant life or green accents to counter the overbearing brick and office-building black windows. Rude and inattentive wait staff. MP will not be missed.

But then again, do we need another burger joint? It would be better as a two story diner. The Ditmars area needs a top-notch diner. Mike’s, Tastey’s and Igloo could all be better.

I thought MP was a bar. It was always so loud with fingerprinted windows.

sounds good. cant wait to try this. never head of this burger restaurant but their menu is different and sound amazing. bye bye MP!!!

Who cares! Enough with the Greek cuisine around here. There is more than enough still around. Restaurants need to cater to the changing neighborhood. Even the new Greek immigrants are more open to other cuisines and burgers are a big trend in Greece.

I feel bad when small mom and pop stores are shut down or taken over. I am sure this owner will be fine without this location on his resume.

It may be hard for a semi famous chef to recover or maintain a good reputation from a Health Dept. closing that was on social media. Many “wanna be” food critics and restaurant goers refuse to go or support places after an inspector finds several violations even though they have been corrected.